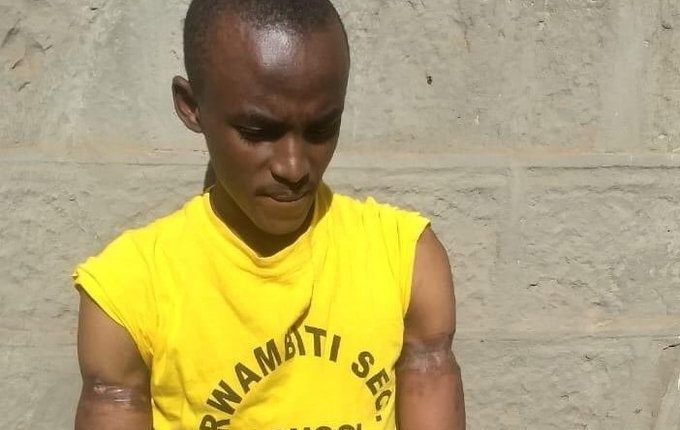 Police in Kirinya County arrested a Form Three student who had attacked a number of teachers at Rwambiti Secondary school on Tuesday.

Gichugu Sub-County Police Commander Anthony Mbogo who confirmed the incident revealed that the student had refused to be searched. The student then began beating up teachers.

Further reports say that the student also tried to create a riot in the school.

The student was caught in possession of a mobile phone by the teacher on duty but quickly hid it and refused to undergo frisking.

The moment the teacher attempted searching the learner, he began raining blows on the teacher forcing other teachers to come to the rescue of their colleague.

The three teachers found it difficult to restrain the student who had broken a window in the classroom at the time.

KNEC Issues Circular on Schools with Less Than 30 KPSEA, KCPE And KCSE…

Eventually, the teachers were able to get hold of the student and then took him to the office of the deputy principal where police officers were called.

When interrogated the student confessed that he had been under the influence of bhang.

According to the school’s deputy principal, David Munga, the 18-year old student re-attending Form Three after failing to reach the required standard in the Kenya Certificate of Secondary Education (KCSE).

The police commander confirmed that the student was in police custody at Kirinyaga police station.

“The Deputy Principal spoke with the parents who are civil servants, but they said that they want the boy taken to jail as he lacks discipline,” said Mbogo.

According to the police boss, the student will be charged with assault on his teachers, creating a riot in school, and also destroying school property of value amounting to Kshs 3000.

Yesterday on Monday, February 1, police officers nabbed a student who had killed his father for interfering with his affair with a girlfriend.

In another, NACADA revealed that the rising violent cases amongst students were due to students using drugs.

Cases of violence among students have been on the rise since the beginning of the year when schools fully reopened for all classes and form after a prolonged holiday due to the novel coronavirus.

Dominic is a Computer Science Specialist with lots of bias on Education. If he's not writing about Education, then he's coding. If not, then you will find him watching series movies.

Ministry of Education Announces New Dates for Form One Admission

This Is When KCSE Results Will Be Released

CS Magoha to CBC Contractors: We will Pay You

Form One Placement to be Released Tomorrow

Qualification for Teaching in Secondary Schools Set At C+ And Above