MP Wants TSC CEO Dr. Macharia and all Commissioners Out of Office

Honorable George Peter Opondo Kaluma, the member of Parliament for Homa Bay Town Constituency, is petitioning for the removal of the Teachers Service Commission Chief Executive Officer Dr. Nancy Macharia with all of her commissioners. 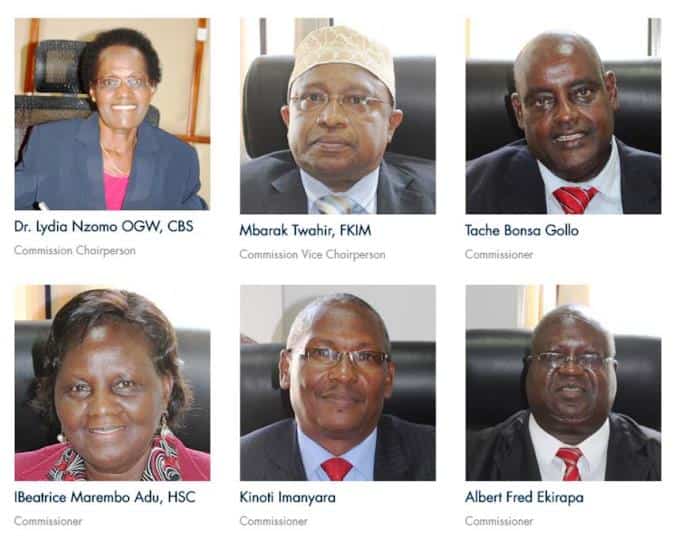 The MP has been on the forefront to query TSC on matters of teacher Union wrangles and interdiction cases.

While addressing Parliament on Tuesday, 3rd December 2019, Hon Kaluma said he is moving the petition on behalf of the Kenyan teachers.

KNUT Pushing for Replacement of TSC Chair and 7 Commissioners

Dr Nancy Macharia is the TSC CEO, Not Leaving Any Soon

“I am being moved by teachers of this country,” Said the Honorable Member.

“I moved this petition to bring for the removal of all Commissioners at Teachers Service Commission (TSC), including the CEO,” added Hon. Kaluma.

The Homa Bay Town Parliamentary representative persuaded the house to support his petition to see that there is a change in leadership at TSC.

The commission’s move of continuing with the delocalization of school heads has not augured well, especially with high school principals and primary school heads who are believed to be the propelling forces in the teachers’ unions.

This year,  the wrangles between the Teachers Commission and the Teachers Union escalated to critical levels.

In a notable incident, the Commission deregistered the Kenya National Union of Teachers KNUT Secretary-General Hon. Wilson Sossion from the Teachers registers through a gazette notice.

However, the Labour and employment relations court managed to reverse the TSC’s gazette notice. The Court reinstated the nominated member of parliament as a registered teacher awaiting the hearing and determination of the case filed by him.

Another pertinent issue raised by the legislator is on the interdiction of teachers by the teachers’ commission.

According to Parliamentary Proceedings files, Hon. Kaluma requested a statement from the Teachers Service Commission (TSC) On 19th September 2019,  concerning the interdiction of teachers after the CBC teacher training saga.

TSC responded to the honorable member on the issue.

Honorable Julius Kipbiwot Melly Tindered member of parliament publicly read it to all members of the legislative house.

Itumbe DOK Teacher Given 21 Days to defend herself Following Interdiction

The commission gave him a background to the cause of the teacher’s interdictions, details of the professional misconduct, and the regulations that the teachers contravened.

Besides, TSC gave details of how it conducted the investigations and their findings.

The response was not well received after Hon Kaluma immediately complained to the Speaker of the house that The Chair of the Committee did not give him a copy of the statement before he read it.

Wundanyi MP, Hon Danson Mwashako Mwakuwona, also tasked the Teachers Service Commission to explain in writing why it is yet to confirm the various deputy headteachers who have been faithfully serving in acting capacities for the positions of headteachers in various schools for unjustifiably long periods?

Also, Hon Mwashako demanded to know why TSC prohibited the unconfirmed deputy headteachers from indicating in their curriculum vitae and other official engagements with the TSC, that they have been serving in these positions in acting capacities?

On the illegal transfer of teachers living with disabilities, Hon Lilian Cheptoo Tomitom, West Pokot member of parliament, took TSC head-on. She wanted an explanation to Miss Martha Lorot, TSC No.369861, a teacher living with disability and a single mother teaching at Alale Primary School in Kacheliba Constituency, West Pokot County, was transferred to Trans Nzoia County about 600 kilometers away from her former school under the teachers’ delocalization policy?

Therefore, she wanted the Commission to exempt the teachers living with disability from arbitrary transfers through the delocalization policy and reverse Madam Martha Lorot transfer status.

Hon Kaluma Petition to Get TSC CEO out of Office

The Homa Bay member of Parliament promised told parliament yesterday that he will petition for the removal of TSC CEO and all the commissioners.

Hon Kaluma referred to various issues handled by TSC, including the interdiction of teachers, and union wrangles.

“This is a very serious matter,” Complained Hon Kaluma.

The MP told the legislative house, on Thursday last week, that some of the interdicted teachers have since died—up to about three of them.

“Teachers who processed all of us, Mr. Speaker, need to be treated with all the dignity they deserve,” warned the Mp.

The legislature pleaded that, “… we stop this situation where a commission thinks they own all the people under the sector(education sector)…”.

However, the Speaker of the National Assembly, Hon. Justine Muturi referred the matter to the Parliamentary Education Committee.

If given full support by other members of parliament, Hon Kaluma’s petition will see the current TSC officials moved out of the office.

TSC Pulls Out Support, Personale and Sponsorship for KEPSHA after Sossion’s Speech