The Kenya Certificate of Secondary Examinations KCSE 2019 Exams has presented itself with some of the weirdest and most tragic happenings in comparison to previous years. This year we have witnessed the loss of lives ranging from school examinations center managers
(principal) to teachers, examiners, and students.

As the over 690,000 candidates continue sitting for their 2019 KCSE examinations, one can not be left to wonder why the following things have to happen. Must there be Deaths, Examination cheating and malpractices, laboratory accidents, teen pregnancies, student riots, mental illnesses, and Student indiscipline cases?

Loss of Lives During the KCSE 2019 Examinations

This years’ exams started on a somber note with the loss of Rev Jeremiah Gitau Secondary School’s headteacher after a road accident in Longonot along the Maai Mahiu-Naivasha highway. The accident occurred on Monday the fourth of November 2019, when the car they were in hit a lorry.

Two of her colleagues who were also center managers, sustained severe injuries.

Candidate Collapses and Dies after 3 days in Kisumu

The first week of the KCSE Exams ended with more sad news, from Kisumu. This time around the death of a student, Stephen Oluoch. Stephen was a 2019 KCSE candidate at Joel Omino Secondary School in Kisumu County. The candidate
was confirmed dead on Tuesday at Jaramogi Oginga Odinga Teaching and Referral Hospital (JOOTRH). The student was admitted to the hospital ICU after collapsing on Sunday 3, November, just hours to the start of 2019 Examinations.

KCSE 2019 Results to be Released from Monday, Biology Poorly Performed

Belinda Atieno, a student at Nyawita Secondary School, Rangwe Sub-county in HomaBay County, succumbed after a prolonged battle with Sickle Cell anaemia. She was sitting this year’s KCSE exams.

Belinda was declared dead on Tuesday at Matata Hospital located in Oyugis. She had been rushed to the hospital for advanced treatment.

“Belinda has been on and of the school due to her medical condition,” Said Mr. Olueya.

However, on the wake of Tuesday, Belinda’s condition worsened. She sought various treatments before succumbing late in the day.

Just two days after the death of a KCSE candidate in Homabay County, another tragic incident struck in Siaya.

Fredrick Juma, a student from Memba Mixed Secondary School in Rarieda, was pronounced dead a few hours after the Friday’s Biology Practicals Exams.

Joseph Wamocho, the Siaya County Director of Education, said that Juma did his morning exams without any challenge.

“He, however, reported to his friends that he was not feeling well,” reported Mr. Wamocho.

Radio Ramogi reported that the student collapsed before other students notified the administration. He was then taken to St. Mary’s Lwak Mission Hospital before later being confirmed dead.

Kenya’s Netizens and all media platforms have congested the social media platforms with discussions relating to Xylene, a chemical reagent that was used in these years’ Chemistry Paper 3 exams.

It is reported that the reagent left many invigilators and candidates ill after Friday’s 8th practical exam.

Xylene was used after many schools could not find Cyclohexane, which was the original chemical specified in the 2019 Chemistry Paper 3 Confidential Report.

Netizens have raised the alarm over the safety of 2019 KCSE Candidates, teachers, and Invigilators after the use of the chemical.

A number of those who interacted with xylene reported feeling some chest pains, headaches, and stomach discomfort.

A Teacher Admitted to Hospital after Exposure to ‘Xylene’

Among the many incidences posted on social media platforms, one stood out. ‘A teacher admitted to hospital after allegedly being exposed to Xylene.’

Cherusha Nyakeri, a teacher, was admitted to the hospital after she came into contact with Xylene.

The teacher who comes from St Monica Girls Kitale, in Trans Nzoia County, inhaled the Xylene fumes when being heated by the students.

The candidate who was sitting the KCSE chemistry practical exam on Friday said she did just 3 questions before the explosion.

Otieno struggled to finish answering the paper before he was admitted at Kombewa Sub County Hospital.

He will be sitting the remaining papers from his bed in the hospital.

Professor George Magoha, the CS Education, has downplayed any reports of laboratory accidents and adverse effects emanated from the use and exposure to Xylene chemical. This is even after even after two teachers were hospitalized after Friday’s 2019 Chemistry Practical.

The CS said that more dangerous chemicals are present in Kenyan school laboratories. He added that despite the chemicals being hazardous, they have always been used with no alarm.

What is Xylene – A Chemical Used in KCSE 2019 Chemistry Practical Exam? 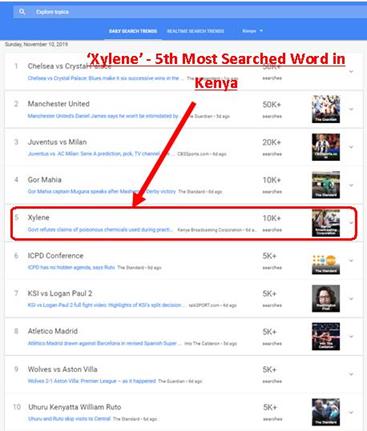 Over 10,000 searches on Google were about Xylene. In fact, ‘Xylene’ was the 5th most searched word in Kenya on Sunday, 10th November 2019, according to google trends.

Physical and Chemical Properties of Xylene

The following are properties of Xylene According to https://www.collinslaw.com files:

Xylene is a synthetic organic liquid with a sweet odour and colorless in color. It can also occur naturally.

It is majorly used to dissolve other chemicals (solvent) in the Leather, Printing, and Rubber industries.

Alternatively, Xylene can be used as; cleaning agent, Airplane fuel, Paint thinner, Rust Preventative, and Pesticide among others.

What Are The Health Effects of Xylene?

The U.S. Environmental Protection Agency (EPA) and World Health Organization (WHO), through its International Agency for Research on Cancer (IARC), confirm that there are no enough data to prove that Xylene can cause cancer (Carcinogenic).

However, Xylene is known to affect the body’s cardiovascular, respiratory, nervous, and the Kidney system.

Known Symptoms to Exposure to Xylene include: