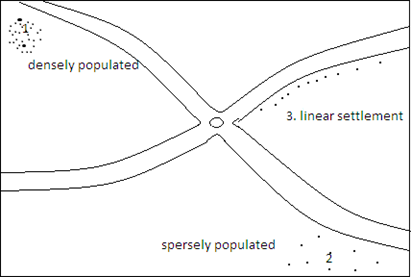 The things around us or in our surrounding make up the environment.

These were things that were made by God. E.g Mountains ,Lakes, Rivers, Vegetation etc.

These are things made through man`s efforts e.g Dams, buildings, roads, etc.

The non – living part of the environment which consists of Soils, air, rocks, water, hills, mountains, rivers and lakes form the physical environment.

A map is a drawing on a flat surface that represents a whole part of the earth.

Elements of a map

Elements of a map helps a reader to understand the information on a given map.

The main element of a map are:

How To Avoid Getting Mad At Your Students

How to Check 2021 Form One Selection Results, and Download Admission Letters

Uses of elements of a map

This is the ability to read, understand, and interpret information given on a map.

Symbols of a map contained in the key should be fully understood and interpreted correctly.

Features that can be interpreted from a map

Economic activities are the objectives that people carry out in order to get income (money).

Social activities on a map

Features on a map that represents administration

Features that show drainage systems on a map

Human settlement on the map

Settlement is the pattern of population distribution in an area shown by dots and black shades.

How to identify the functions of a town on a map

These are things we see on the surface of the earth. They include natural physical features and man-made(human)

The effects of physical features on human activities

Very hot and humid: Coming of the rain.

Strong winds blowing after a dry weather: Showed the coming of the rains

Wind blowing during the rainy season: Meant chasing away of the rain to give way to a dry spell.

It is the science of observing and measuring weather elements.

The raingauge is dug into the ground as shown above.

Climate change is the occurrence of unexpected change of climatic condition in a particular region. The main factors influencing climate change include:-

Heat and smoke from industries cause pollution and increase temperature in the atmosphere.

Excess use of chemicals

Such as fertilizers causes atmospheric change due to the gasses they produce.

The growing of rice under irrigation contributes to warming of the atmosphere. The rice in water release a gas known as methane, which contributes to global warming. The same applies to the use of fertilizers.

vehicles .Machines give off a gas known as carbon monoxide, which makes the air warmer.

Clearing of vegetation for agriculture

This exposes the soil to agents of soil erosion.

Human-made lakes which form behind the dam modify the climate.

These leads to temperature change along the coastal areas.

Soil is formed through a process called weathering. Soil contains:

Characteristics of types of soil

Soil erosion is the natural displacement of soil from the original place of formation to another by agents of erosion like wind, water and human beings.

The major causes of soil erosion are as follows:

Deforestation- Cutting down of trees which exposes the soil to agents of soil erosion.

Overgrazing-Livestock grazing on all pasture (vegetation) leaving the ground bare.

Monocropping-Growing of one type of crop on the same peace of land year after year exhausts soil fertility.

Over-cropping-Growing of many different types of crops which compete for nutrients. The soil finally becomes loose and infertile

Mining and quarrying-Results to displacement of soil.

Re- afforestration:       Planting of trees where they had been cut down.

Crop rotation:-            Growing of different crops on the same peace of land in alternate planting seasons.

Cover cropping:          Planting of perennial crops like coffee and bananas together with food crops likepotatoes, beans and maize.

Construction of gabions:         Pilling up of stones in iron cages to prevent

Terracing:       Making of horizontal steps on sides of hilly areas.

Fallowing:      Leaving the land idle for some time in order to retain its fertility.

Controlled grazing:     This is done by subdividing land into paddocks.

Use of fertilizers and manure:            This helps the soil to regain its fertility.

guarded by the contours.

It is based on folktales told by various communities on how they originated.

Luo – Claim to be descendants of their ancestor Ramogiwho lived on Ramogi hill.

Kalenjin – Claim to be descendants of the first Orkoiyot ( medicine man) called Miot.

Wagiriama – Claim their ancestors lived at a place called Muyeye in Malindi.They dispersed from Muyeye and formed the nine (9) sub tribes as they migrated.

Agikuyu – Claim to have descended from Gikuyuand Mumbi Who lived at

Baganda – Claim to be descendants of Kintu who lived on Mt Elgon. The theory of creation

It is based on Religious beliefs.

It explains that all human beings and other creatures were created by a super natural creator, God among the Christians and Allah among theMuslims.

This is a scientific view which explains that human beings developed slowly ( evolved ) from primitive ape – like creature to what they are today. This view was first suggested by a scientist called Charles Darwin.

Archaeology – Is the study of human evolution.

To understand the evolution of man archaeologists study:-

Where the fossils of early man was discovered

Migration is the movement of people from one place to another. Migration within a country is called Internal migration.

Migration from one country to another is known as external migration.

The four main types of Migration taking place in Kenya are:-

This is the movement of people from rural areas to urban areas.

This is the movement of people from urban centers to rural centers.

This is the movement of people from one rural area to another.

Note: Most rural – rural migrations are permanent especially in cases of movement to settlement schemes.

This is the movement of people from one urban center to another.

Note: These migrations occur in a small scale .

Immigration: Is the migration of people from one country into another.

Emigration:     Is the migration of people out of a country.

Reasons for the establishment of settlement schemes in Kenya

Irrigation refers to the application water to crops through artificial means in order to facilitate their growth.

River Nyamindi,River Thiba: Both are tributaries of R. Tana.

Contributions of the scheme to the economy

Contribution of horticultural farming to the economy of Kenya

Horticultural farming in Kenya and Netherlands

Fishing is the practice of removing or harvesting fish from water.

Fishing is a major economic activity for those people living next to rivers , lakes or oceans which have fish.

Fishing grounds are places where fish are caught.

Inland fishing is also carried out in big rivers such as:-

Comparison of fish farming between Kenya and Japan

Mining is the removal (extraction) of a mineral from where it has naturally been formed.

The main minerals in Kenya include

Contribution of minerals to the economy of Kenya

Effects of mining on the environment

Forstry is the practice of establishing forests and caring for trees. It also involves paper harvesting and good use of trees.

Types of forests in Kenya

There are two main types of forests found in Kenya. These are:

This are forests which have grown on their own. They are divided as follows:

They grow in salty waters of the Indian ocean.

They grow along the coast in:  Kwale,Kilifi,Lamu,Malindi

They have been established through efforts of human beings.

They are found in high rainfall areas where afforestration programs are being carried out.

These forests are found in the following areas:

Types of trees found in planted and natural forests

Effects of deforestration in Kenya

Deforestration is the cutting down of forest trees faster than they are replaced through reafforestration.

Forest conservation is the careful harvesting and good use of trees found in the forest.

Wildlife refers to plants , birds and animals in their natural environment. (habitat).

Tourism is the travelling to other places of interest for pleasure.

Tourists attraction in Kenya and Switzerland

Differences between Kenya and Switzerland

An industry is a place where raw materials are changed from one form to nother ,processed and assembled.

Sugar from a processing industry taken to another factory to make sweets, bread or soft drinks.

Reasons for the establishment for Juakali industries in Kenya

Contribution of industries to the economy of Kenya

The school: A school is a centre where learning takes place both formally and informally.

It is also a place where the learners acquire knowledge.

The public schools are run by the government through the ministry of education.

At the district level, the schools are managed by the District Education Board. (D.E.B)

The D.E.O is in charge of all the education matters in the district.

Rights and responsibilities of spouses in marriage

The main economic activities in Kenya include:

What the settlers farmers were engaged in

Effects of settler farming in Kenya

Reasons for establishment were as follows:

Benefits of settlement schemes in Kenya